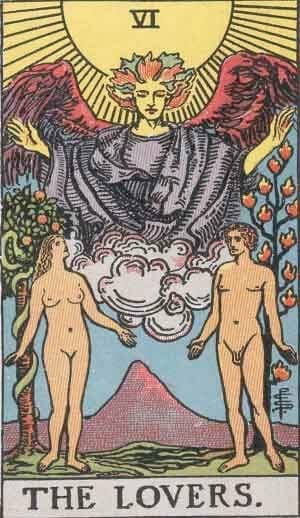 “I think you’ll understand,” say The Beatles, “when I say that something.”  “I wanna hold your hand,” says Paul.  For those of us who are a little commitment shy it might seem obvious why the Lovers card looks so much like the Devil.  I personally have had thirty-five years, on and off, with the same person without becoming over-entangled.

If you’re among the more optimistic, or the more romantic, you might be cheered by the sight of the Adam and Eve characters, reaching for each others’ hands, being blessed by an angel from above.

In past times this card was designed and named differently.  It showed a young man torn in two directions, from behind by an older woman and forward by a beautiful young woman.  The Fool, having learned his first five lessons from impressive adult teachers, comes to adolescence and the time when his eyes roam from his mother to a delicious young thing more his own age.

“Wild thing,” say The Troggs, “you make my heart sing, you make everything groovy, wild thing.”  There finally comes a moment when the Fool has to choose between the comfort of his mother and the excitement of a lover.  This card was formerly known as “Choice.”  It is in adolescence when we learn to choose for ourselves, when suddenly we have our own independent life with its strange adornments, bizarre speech and absurd behavior.  It is necessary for the youth to act in this way in order to learn to take his own power and make authentic choices.

“Put your little hand in mine,” say Sonny and Cher, “there ain’t no hill or mountain we can’t climb… I got you babe.”  Forming alliances with the opposite sex is one of the most important rituals of this time of life.  (Along with driving, which we find in the next card, the Chariot.)  Securing that all important first relationship is empowering, it launches you out of your mother’s arms and into the brave new world.  All it takes is an episode of handholding and you’re on your way to climbing the highest mountain.  Sweet.