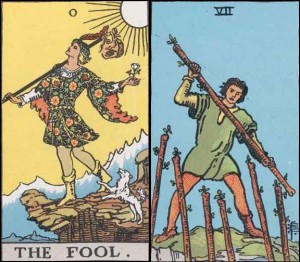 “The thoughts,” says Led Zeppelin, “of a Fool’s kind of careless.”   It only takes one glance at the tarot card of The Fool to know just how careless this guy’s thinking really is.  In the brain department he must be something of a zero.  In his colorful costume, beatific smile on his face, he prances down the mountain path, verging on a plunge to certain death with his very next steps.  Clearly, he’s not with the picture here.

At the Fool’s feet we see a little white dog raised up on his back legs.  There are two schools of thought about this companion: one is that he smiles with joy and participates in the dance, the other that he barks out a warning and nips at the Fool’s heels to keep him from falling off the cliff.  I believe older cards are less ambiguous and hold more with the latter.  Perhaps, circumstantially, it would be more clear in a reading which type of mutt is engaged in any particular Fool’s environment.

“All my bags are packed,” say Peter, Paul and Mary, “I’m ready to go.”  Also remarkable in the Fool tarot card is the staff he holds over his shoulder, and the satchel dangling from its end.  The staff is like a Wand, both a symbol of wisdom and a tool many characters will use throughout the minor arcana, though the Fool makes little use of it himself in guiding his way down his mountain.  In the satchel, locked up tight, the Fool carries the four elements necessary for his future development: a Pentacle, a Cup, a Sword, and a Wand.  In the next card, The Magician, we will see these symbols laid out on the table ready for the Fool to take them up in earnest.

“Standing on a hill,” says Led Zeppelin, “in my mountain of dreams, telling myself it’s not as hard as it seems.”  I like to contrast The Fool card with the Seven of Wands, a similar opposite.  Both of these characters stand on a cliff, yet they face very different situations. The Fool is unfettered and unfazed, recognizing no responsibilities and about to fly off of his cliff.  The character in the Seven of Wands, on the other hand, has the face of a man who recognizes very heavy responsibilities and is fighting hard to meet them.  He is unlikely to fall off of his cliff, he is barricaded by a wall of opposing wands which he battles using the one carried before him as a weapon, rather than flung carelessly over his shoulder as by the Fool.

Mr. Seven Of Wands understands things really are as hard as they seem, that you may have to face stiff competition and may need aggressive determination.  It takes strong conviction, inner strength and judgment, and a lot of skill and nerve to get you through the hardships.    He has developed significant wisdom on his long journey from new Fool through Pentacles, Cups and Swords to the Seven of Wands, and he uses this to his best advantage to stay atop his cliff.

“Why,” asks Frankie Lymon, “do Fools fall…?”  But of course in the tarot the Fool doesn’t fall.  It looks like he’s about to, but every time I see the card he still up there on the cliff, oblivious.  Our Fool, unlike Mr. 7 Wands, always says to himself oh, pooh, it can’t be as hard as it looks, and so he blithely dances towards the fragile edge of the mountain cliff, easy as pie.  And then he escapes a situation fraught with danger, by his very innocence.

Every one of us, young or old, no matter how wise in no matter how many ways, still has a bit of foolishness in some other ways.  It creeps up on us somehow.  I myself recently was somewhat caught in an Internet scam while trying to start a business.  This makes me look and feel very foolish.  Not only am I fairly sophisticated with the Internet, I am a trained lawyer, I should know better.  But that’s the thing about being a Fool, after-the-fact you’re always saying shoulda, coulda, woulda.

The big question after you’ve been foolish is whether you escape by the innocence of The Fool, or whether you have to deal with the hardship in the manner of the Seven of Wands.  Through some quirks of fate and the tax laws it looks like I might just get by like a Fool after my Internet escapade, and end with zero loss.  That sometimes happens by sheer innocence, not advance planning.  But more often as adults we have to battle it through to keep from falling off our cliffs.

Wise men,” says Elvis Presley, “say only Fools rush in.”  We have to keep in mind the endlessly cyclical nature of the tarot.  The Fool travels on his journey all the way from card 0 to card 21, the World, and then once again becomes the reborn Fool.  We are really in some ways always in all stages.  It’s hard to know sometimes when we are standing on a cliff holding a line with skill and determination, or when we are blithely, ignorantly dancing down the path, rushing into the big fall.  We have to listen for the niggling bark of the little dog at our heels, be he playing along or warning us, he is surely reminding us of just how careless might be the thoughts of a Fool.