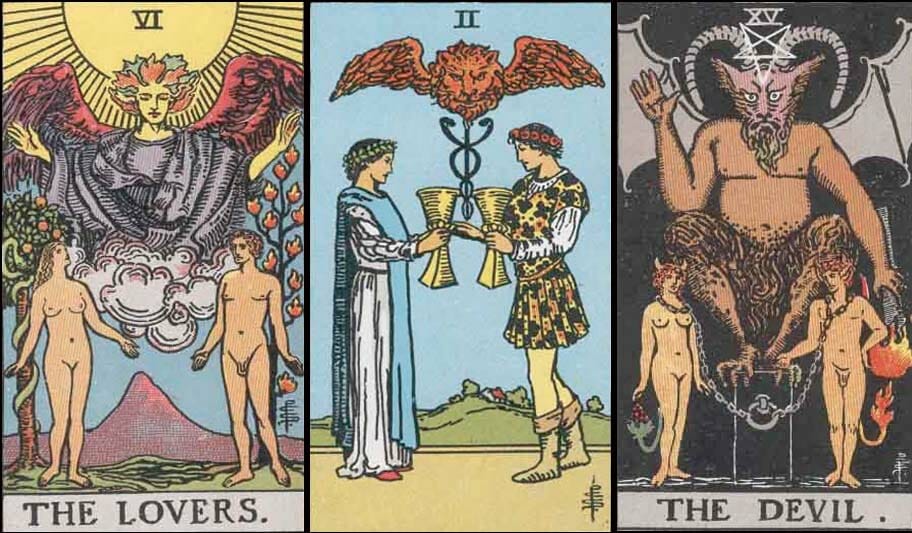 “I was looking for love,” says Johnny Lee, “in all the wrong places.”  If you were somehow clever enough to have read my posting on the tarot card Lovers you will have already heard how this card used to be called “Choice.”  In its earlier form, rather than bearing two naked lovers, it showed a fully-dressed man torn between his mother and a well-clad young woman, the man having to decide which to follow.

“Let’s make a deal,” says Monty Hall.  The sedate Two of Cups card hardly brings to mind the crass, shrieking marketplace of the television game show, yet there are surprising similarities.  We must look to the symbolism to understand why.  Like the angel rising between the two figures in the lovers card, we have a winged lion above two intertwined snakes.  This is a familiar icon known as a caduceus.

“In Rome,” says the historian, “Livy refers to the caduceator who negotiated peace arrangements under the diplomatic protection of the caduceus he carried.”  Oddly, the caduceus is familiar to many of us for entirely the wrong reason.  In North America it is commonly and mistakenly used as a symbol for medicine.  However, in the rest of the world it is traditionally a symbol for commerce or negotiation, and has nothing at all to do with the medical arena.  It’s about making deals.

“We are all just prisoners here,” say the Eagles, “of our own device.”  We can hardly discuss love cards without at least passing reference to the tarot card The Devil.  As a dark perversion of The Lovers card, we see our same two characters loosely chained to the plinth of the Evil One, seemingly at his mercy, though truly at the mercy of their own needs and desires.  At any time they could remove the chains and walk away, but walking away is just so hard to do.  I admit to having sought a partner or two on the dark side myself back in the day.  Just a taste of delicious devilry.  Don’t tell my mother.