Tarot Card #7 Of Swords: Steal Away

You are here: Home1 / Tarot Card #7 Of Swords: Steal Away 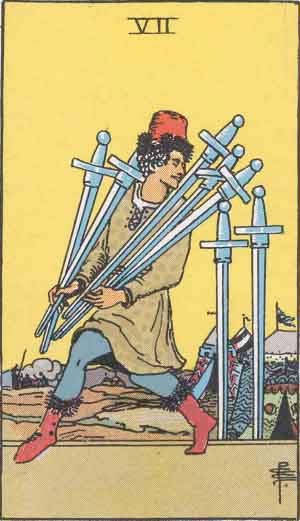 “Steal away, let’s steal away,” says Celtic Thunder, “no reason left to stay.”  The Seven of Swords is a very peculiar card.  Here we have somebody stealing a passel of Swords, and sneaking away on tiptoe.  If you look closely, just above his left foot you can see In the distance the three guards he’s avoiding, though unfortunately he’s looking the other way and may not see them.  In fact, he’s not even looking where he’s going as he leaves the card, and we know not what trouble he might be stepping into.  Neither does he.

There is an essential dissonance about theft which has been problematical since time immemorial.  Our tarot thief is clearly not a poor man, his hat and boots are trimmed in fur, but he cannot resist the temptation he sees in the abundance of seven unattended Swords.  Some people would feel this way, some people would not, the idea of ownership is stronger for some than others.  For all those in the middle there is a sliding scale of dissonance that births the thrill of stealing, a tension between illicit reward versus potential consequences.  Our thief certainly looks happy to be getting away with his prize, telling us something about his standing on the scale of ownership value.  He believes in it, and he loves violating it.

“I’ve walked these streets in a carnival of sights to see,” says Natalie Merchant, “all the cheap thrill seekers, vendors and the dealers, they crowded around me.”  We could wonder something about the environment from which our tarot thief came, though I don’t believe it really controls the outcome when it comes to developing moral compass.  We can see the carnival tents behind him, flags flying, and with his colorful clothing he certainly could’ve been one of the crowd.  But whatever our social environment, once we violate the rules by becoming a sneak thief it is necessary to sneak away. The social environment becomes closed to us.  Our tarot thief must leave the carnival, and now he knows not where he goes, he can only look over his shoulder fondly to where he has been.

“Now,” says Pearl Jam, “make your getaway.”  Of course, he might get away with it.  It’s a bit childish, really, taking pleasure in theft.  Children have to learn not to steal, generally by getting caught, not by getting away with it.  At at age maybe 10 and 11, a boy I knew and I didn’t get caught, that summer night, when we sneaked through the orchard, over a fence and into a neighbor’s garage to steal the yard sale Playboy magazines.  I am now a straight arrow who doesn’t even fudge on my taxes, and though I laugh a bit I am abashed to admit my first foray into the criminal world was, as my juvenile counselor sister points out, a full-blown burglary.  We made a clean getaway, but we could have had, and probably should have had, major trouble.  We both turned out okay, that boy and I, but of course it doesn’t make it any better.  It just makes you more curious what our thief may or may not be stepping into when he leaves our Seven of Swords tarot card.  Perhaps he straightens up.

“Come on, baby,” says Etta James, “steal away.”  We’ve all gotten away with something at some times in our lives, not necessarily by a theft of objects but by sliding by with something.  You know what I mean.  This is not good for us.  A stolen object can be a double-edged sword, now you have it but you may not be able to use it, you may have to hide it away so you won’t get caught, it could hurt you or even land you in jail.  Or perhaps even seeing it causes you the pain of guilt.  If you look at our tarot thief, he holds his five stolen swords by the blades and we fear he may cut his hands on his treasure.  Oh, baby, watch out.

But as with so many things, our thief is not watching to prevent injury.  He has his booty, but he’s looking over his shoulder at the two swords he left behind.  Should he have picked them up too? Once we get away with something, we think we might have gotten away with more.  Greed is a voracious bedfellow, it can cut you to ribbons.

“Mine is mine,” says Pearl Jam, ”and yours won’t take its place.”  Unfortunately, taking a little of what belongs elsewhere is part of human nature, from one end of the world to the other, from the beginning of time to the end, from the least of us to the greatest.  And when someone gets something, someone generally loses something.  This is one reason why adults are supposed to have grown out of it.  So we watch for this card and take warning that we may be trying to get away with something, trying to take advantage of something, even perhaps trying to steal something outright.  If this doesn’t create a dissonance within us, it should.