“Got no time to for spreading roots,” says Led Zeppelin, “the time has come to be gone.”  I  have introduced in previous postings (Stage I and Stage III) the Long Strange Trip the tarot Fool takes through the cycles of the majors cards.  Here in Stage II of the threefold path our Fool emerges from adolescence with new-found strength.

The Swapping Of Cards Strength And Justice 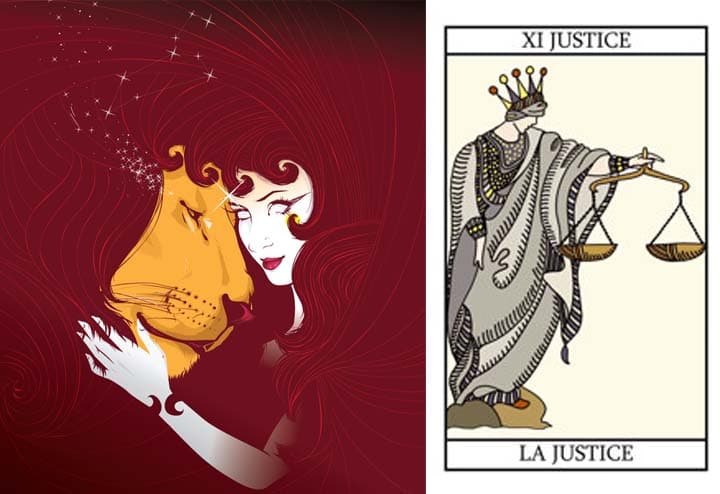 Or at least, that’s how it happens in tarot cards which follow the sequence laid out by Arthur Edward Waite, who switched what had been Card #11 Strength to position 8, moving the tarot card Justice into position 11.  Some disagree, but I personally hold with this.  The young adult feels his Strength early, and first he needs to do some searching as The Hermit, and then to experience the random nature of The Wheel of Fortune before he will have the wisdom to progress to Justice.

But I get ahead of myself a little.  In general, this second stage of the journey differs from the first in that the Fool has launched himself out into the world to gain experience on his own, rather than learning from individual instructors as he does in the first stage.  Things begin well with Strength, which oddly doesn’t mean brute force but rather means using your better nature to overcome frightening obstacles with calm resolution.

“Wandering and wandering,” says Led Zeppelin, “what place to rest the search?”  Penetrating further into his self inquiry, our Fool encounters the tarot card Hermit and the solitude of night in winter.  And yet this is not a “bad” card, is merely a restless card.  He has in his right hand the brilliance of his own intellect to light his way through the darkness, and in his left a staff of wisdom to help find what he is seeking.  He simply has to discover his own way at this point, and the landscape offers few pointers. 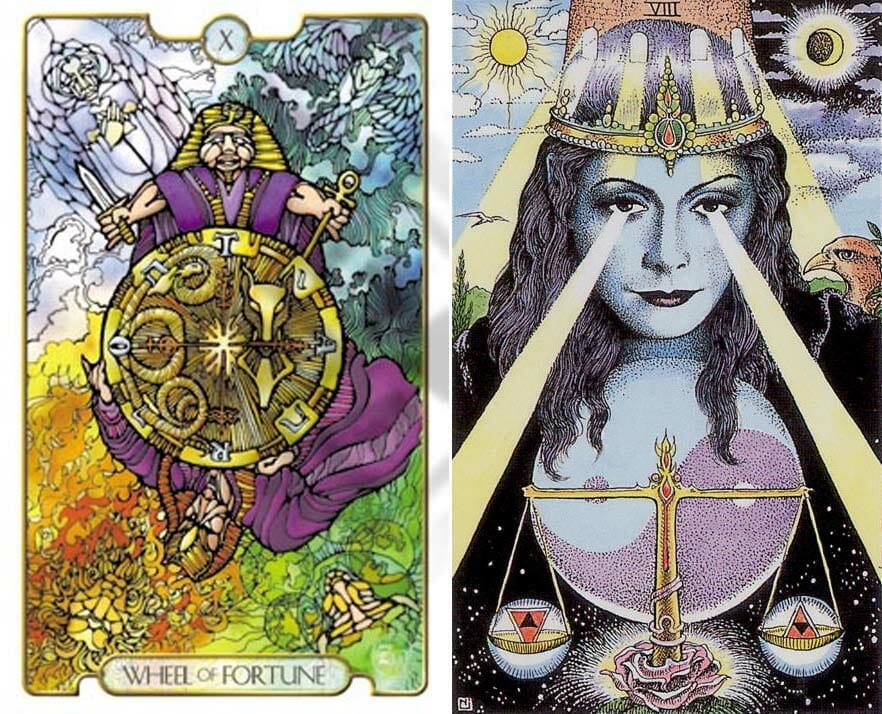 Rapidly our traveler is flung to the mercies of the tarot card Wheel of Fortune, to find what little control he really has over his fate.  But soon thereafter he meets with the symbol of man’s moral control over man, the card of Justice, where truth is divided from falsity.  This is wisdom indeed.

“They talk of days,” sing the Zeppelin, “for which they sit and wait, all will be revealed.”  We soon reach another card which, at first glance, seems worse than it is: the tarot card of the Hanged Man.  Nobody’s life is ending in this card, rather our traveler has suspended himself for a while in order to look deep inside and find his own enlightenment.  An internal mid-life crisis, where he turns his world upside down in order to find himself. 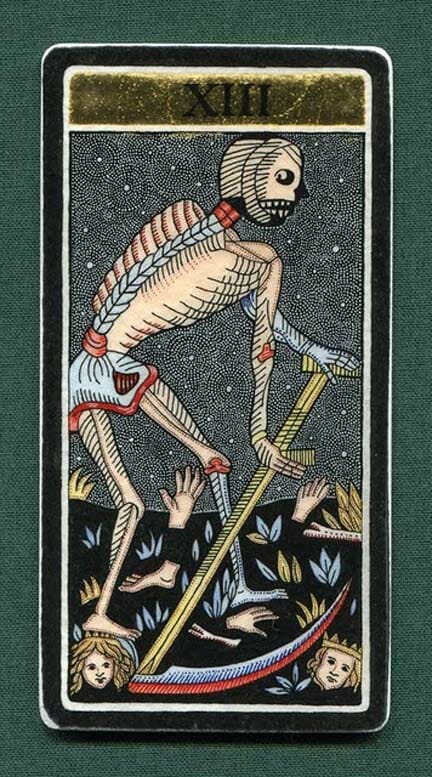 “The sea was red and the sky was grey,” they sing, “wondered how tomorrow could ever follow today.”  Having promised you nobody’s life ends in card #12 The Hanged Man, you may be surprised to encounter as the next tarot card #13 Death.  This card also is not nearly so frightening as it looks, and indeed another tomorrow does follow this day.  (Quite a nice one.)  Death is a card not of sudden severe ending, but of total transformation.  Growing from childhood to adulthood – following our life’s path – requires total transformation.

“Mine’s a tale that can’t be told,” says Led Zeppelin, “my freedom I hold dear.”  Having come through the transformative trial of Death, our Fool emerges into the dim setting sun of Temperance.  Here the glowing nimbus which surrounded the head of the Hanged Man is firmly fixed around the head of our balanced, passion-winged angel.  We have finally achieved an enlightenment we sought in this middle part of life, and we pause for a moment in delicate balance.

On To Stage III

“But now,” says Led Zeppelin, “it’s time for me to go.”  It would be nice to simply stay here with our Temperance, but it is still not time for spreading roots.  The end of one stage merely marks the beginning of another, just as the end of one cycle marks the start of another.  The Fool’s Long Strange Trip Stage III looms before us, and once again the time has come to be gone.

The opening cards are from the Waite Smith deck.
The Strength graphic is by Cryssy Cheung.
The Justice card is from the Lover’s Tarot deck.
The Hanged Man card is unattributed.  Further information is dearly sought.