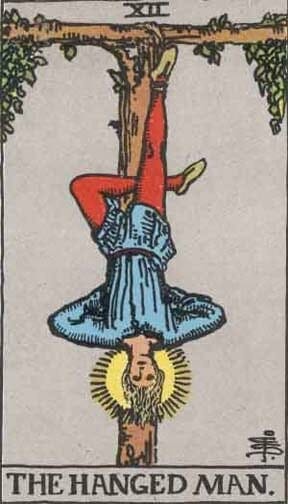 “Hung upside down nine days and nights,” sings Manowar, “…the will to be a sacrifice of myself unto myself.”  As Norse mythology goes, the god Odin hung himself from a tree in order to meditate and discover for mankind the gift of writing.  In the tarot, our Fool reaches a point on his journey through the majors where he needs to turn inward on himself to contemplate and reach enlightenment.  For this, like Odin, he suspends himself from a tree.

“Hangman, hangman,” says Led Zeppelin, “upon your face a smile.”  The appearance of the tarot card Hanged Man usually has an unnecessarily daunting effect.  However, this is not the card of a man who has been hanged by the neck until dead, but rather a man who hanged himself by the foot until enlightened.  If you look closely you’ll see on his face a placid smile.  He is not unhappy to be here, he has chosen to be here in order perforce to suspend his activity in the outside world, and thereby focus all his energies internally. 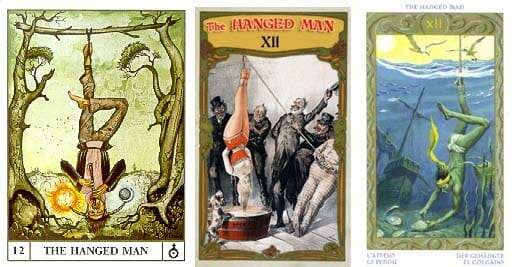 Sometimes thinking interferes the most with contemplation.  I’m a thinker, I can’t help it.  Meditation is meant to turn off thinking, and I’ve tried some traditional forms of it without much success.  Instead, I find I have affinities for the kind of activities which tend to turn the hands on and the brain off, things where I get so absorbed that I stop thinking, and time just flies by without awareness.  Art, craft, music, these creativities are my best meditations.  Sometimes you have to take your contemplation where you find it in this rapid paced world, in order to move into the quiet space just beyond where balance and freedom are restored.  But with The Hanged Man, no such distraction is possible, in spite of some modern interpretations.

movement.  In the eight of swords her head is bound so she cannot see or even think, she must feel her way forward with feet that are free.  In The Hanged Man this is reversed, as is the character himself.  He suffers his feet to be bound so he cannot move, and yet his head is free, pillowed in a glowing nimbus of light, showing he can think and see clearly.

Both The Hanged Man and the Eight of Swords tarot cards are passing through portals, and we see these characters in a moment when they are changing from lives of entrapment to newfound freedom.  This is obvious in the Eight of Swords: in the background we can see the castle in which she was imprisoned and from which she laboriously escapes.  In The Hanged Man we must look for this from card to card in his Fool’s journey.

The Fool has just endured the vagaries of The Wheel of Fortune, and met with the opposing rational forces of Justice.  This is a lot to absorb, and in The Hanged Man we find him paused momentarily on the threshold to the next big thing.  This doorway

leads to a major transformation as we see in the card that follows, Death, from which he emerges into the freedom and balance of the tarot card Temperance.  The Hanged Man is poised, gathering himself from lessons learned and for trials to come.

“Hang it up,” says The Grateful Dead, “and see what tomorrow brings.”  The point of the Hanged Man is that with all this journeying, all this to-ing and fro-ing and changes from external forces, there comes a time when our Fool must shut down and process the internal knowledge that has been acquired, in order to turn it into wisdom.  It may take a sacrifice of the earthly for a while, and you may have to tie yourself down in order to prevent yourself from partaking of the world, but sometimes sacrifice is worthwhile when enlightenment is what you’re after.  And to each his own nimbus.