Tarot Card Swords: Face Up To It

You are here: Home1 / Tarot Card Swords: Face Up To It 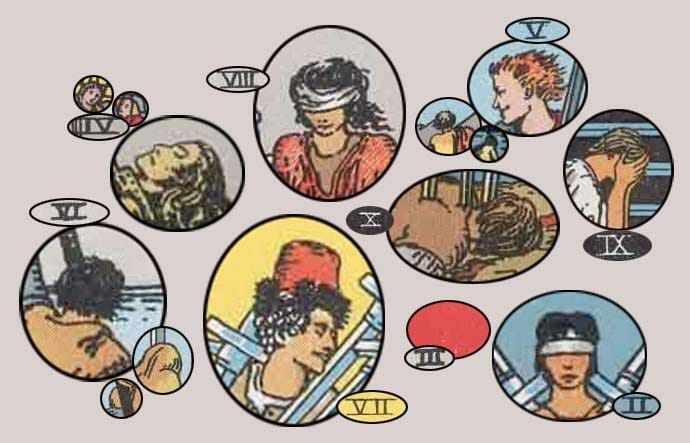 “Fasten your seat belts,”  Bette says, “it’s going to be a bumpy night.”

We examine the suit of Swords and this can be uncomfortable, trying to look our problems right in the face when it comes time to clear the air.  Unfortunately, if we don’t face up to difficulties they have a way of sneaking up and getting us from behind.

The entire suit of Swords is problematical.  This is the intellectual suit, the mysteries and

perturbations of air.  Oddly, we find the people in the suit of Air can’t look us directly in the eye, something always prevents them from an open honest gaze in our direction.  It appears to be as difficult for them to face us as it can be for us to face the problems they endure for us. 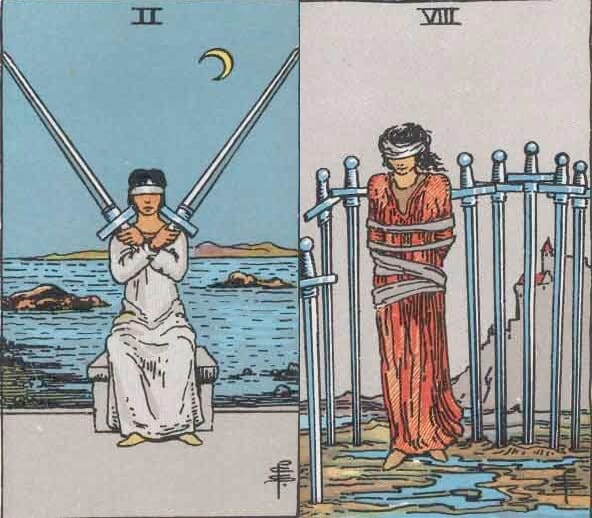 Only twice are the faces even turned our way, but in each the eyes are bound and (in?)sightless.  Look at Card 2, where we first encounter a problem and weigh its components, and later Card 8 where we have struggled for some time and it seems no end is in sight.

Then in one card, Card 3, there is no face at all, where heartbreak has so obliterated the individual identity there are simply no eyes to see, no ears to hear, no mouth to speak.  In the next, Card 4, the face isn’t just turned away but the eyes, ears and mouth are closed in a mask of near-death as the knight succumbs to his contemplation.

It is here in Card 4 that we find the only face turned toward us, a little tiny one in the upper left corner, but that’s not even a person it’s a piece of stained glass, colored light coming to us through the air in waves, or particles, or both, depending on your scientific persuasion.  (The Physical can be so esoteric.)  A tiny, hopeful (or wry) man giving blessing at once to his kneeling acolyte and to the actual character, our sleeping knight. 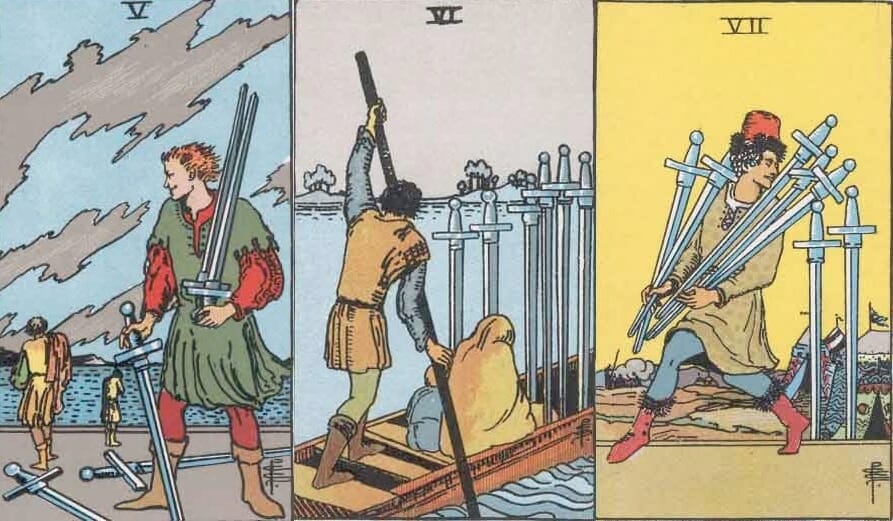 The knight awakes and engages in the world, but first forays, though won, do not go well.  Card 5, his gloating face turns away from us as he smirks after his sad over-conquered foes.  Card 6, with bowed backs the huddled family poles through turbulent waters to far-off lands.  Card 7, our sneak thief can’t help but look back over his shoulder at the two swords he left behind as he oils away from the bright lights and colors of the warm civilized world. 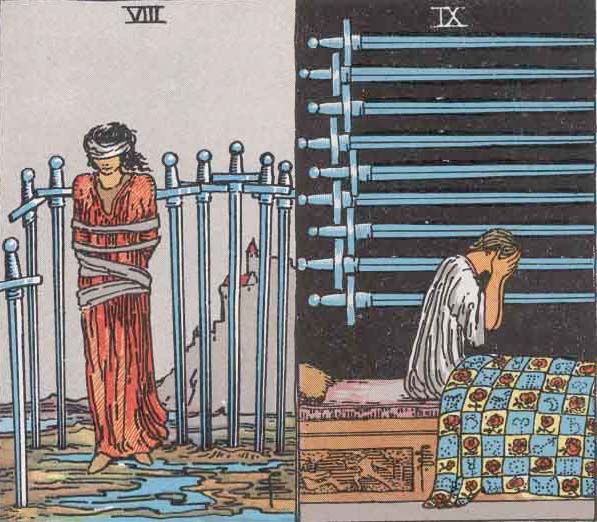 Card 8 we already know, our eyes and arms bound as we struggle sightless through our travails.  Card 9 is scarcely better, awakened from a nightmare with face buried deeply in cupped hands.  And finally Card 10 where nothing could get worse, completely stuck, we are laid out on the ground with bleeding face buried in the sand.  An ignominious end to a frightening trip.

It appears the Fool has abandoned us on our journey at the lowest point in the cycle, as in the black cards of Death, the Devil, the Tower.  It’s a good thing we know the swords are made of tempered steel, forged of heat and pressure to that fine honed shining razor edge, and the cycle continues on to the triumphant suit of Wands.

In the problematic suit of intelligence and air, the glinting light and steel of swords that divide and decide, it only appears we will be overcome by our problems.  Here we must encounter these problems in order to learn and acquire our temper.  The suit of Swords is life not for the faint of heart, and it makes for a very bumpy night.  Fasten your seat belt and face up to it. 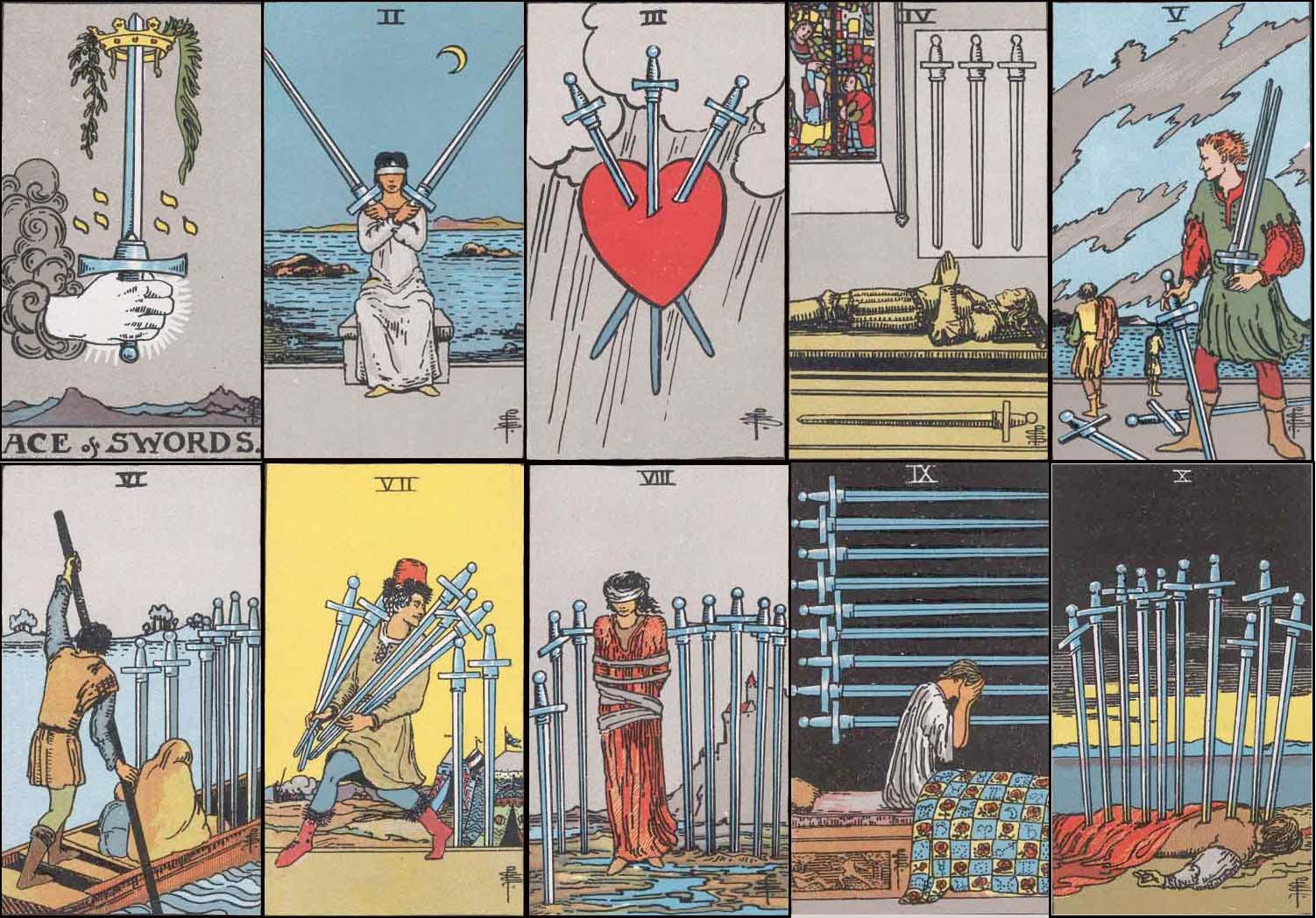 The photograph is from the movie “All About Eve,” 1950
The cards are from the Rider Waite Smith deck.