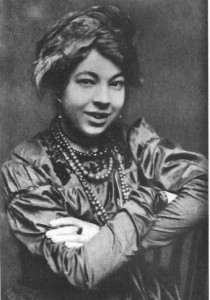 In the murky past of the tarot deck a vague evolution took place beginning sometime in the 1400’s, perhaps in the Arab countries, though mythology ascribes it to Egypt or India.  Migrating to Italy, luxurious handmade card games took hold and of course later became mass-market block print decks as well.  Further populating European card tables, France became a mainstay provider of several types of tarot games and the modern style deck emerged in the 1700’s to remain with the 78 fairly stable elements ever since.

It was at the turn of the twentieth century that a great revolution took place for the tarot deck.  Mr. Arthur Edward Waite (a member of the Hermetic Order of the Golden Dawn) spent years developing a complex iconography and enlisted Pamela Colman Smith, also known as “Pixie,” to prepare the illustrations for all 78 cards.

At this time it was almost unheard of to have illustrations on the pips, or lesser numbered cards, but even Ms. Smith borrowed some of her images from existing cards.  Her deck was published by the Rider Company in 1909, and of course was immediately named for the two men of the project, to be known as the Rider Waite deck for the next century.

The great success of this tarot deck is that the paintings are somewhat naïve, and yet rich with symbols, which allows easy accessibility as well as a great depth of imagination and interpretation.  It has proven to have not only great staying power, but has seeded innumerable imaginative “clones,” especially in the 40 years since the copyright went to the American company US Games Systems, Inc. bringing the deck to wide visibility.

I personally have a collection of more than 850 different tarot card decks, and this is by no means comprehensive.  My guess is near two hundred are relatives of the Rider Waite Smith deck, if not downright thefts.  I love the great intellectual creativity that has gone into transforming the deck into a new author’s special interest, from Stick Figure to Steampunk, Housewives to Halloween, two dozen Cats to one Hello Kitty.

What more could you ask for in a hobby?  It is a pursuit esoteric, humorous, intellectual and artistic, all-in-one.  As I understand it, meaning I read it on the internet for what it’s worth, after this year, 2012, the art actually enters the public domain and is legally available for cloning.  Thank you, Mr. Rider, Mr. Waite and Ms. Smith.  Here’s to the next century of fabulous fun.

The photograph is of Pamela Colman Smith, circa 1912, and is unattributed.
The sample cards are from, on the left sides the Waite Smith deck, and on the right Steampunk, Housewives and Hello Tarot.