You are here: Home1 / Tarot Cards #7 And 9 Of Pentacles: Gardens Growing 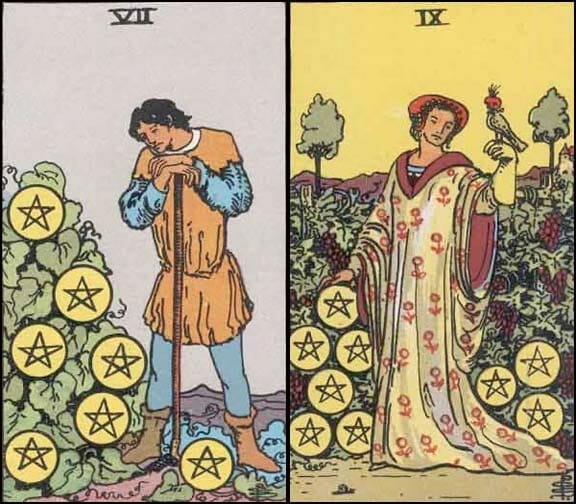 I suppose it is only fitting that we begin with work and then move on to the reaping of rewards.  In the card Seven of Pentacles we have a farmer who has labored long and hard.  He holds in his hands the tool of his trade, a hoe looking much like a Wand and representing the employment of his own wisdom in turning the earth to create new life.  Tired, he props himself up with his working hands on this wise tool as he pauses to contemplate the fruits of his labors.

And what he contemplates is a bush fully blooming with shiny Coins, the rewards of his hard work.  Now he has a decision to make.  Is it time for the harvest, or should he let the fruits further ripen?  We all know that feeling of time slowing to a crawl when we have to wait for our reward, and it seems the right moment will never come.  This is a time when we have to be very careful of our judgments, not to color them in favor of our tiredness and anticipation.  Oh, how difficult that can be.

In the tarot card Nine of Pentacles we see a very different garden, and a very different gardener.  This is no common laborer, this is a grand lady enjoying the fruits of a lifetime’s accumulation, and beautiful bountiful fruits they are.  She may not have grown the plants with her own soft white hands, but they are the result of her journey through the suit of Pentacles to this penultimate pip card.

This lady’s experiences have brought her wisdom in the way of growing things of the earth, which we can see represented in the flower symbols which adorn her gown.  She has such control over nature that she can keep a wild bird, temporarily blinded by a hood, which she uses to hunt other wild animals for her own enrichment.  Sturdy stakes, which resemble the wands of wisdom, are lashed together to support her growing vines.  She rests her right hand, almost as though on the head of the child, on the uppermost of the Pentacles which gather around her, as though she has a family of Pentacles.

The man in the tarot card Seven of Pentacles has labored hard and waits, exhausted, for nature to supply his reward.   This is in stark contrast to the woman in the Nine of Pentacles who has a life of supreme abundance, earned on her passage through the suit of Pentacles where she has acquired wisdom in the way of the Earth and now can easily supply all her own needs and wants, bending nature to her will.

Still, in the end, it is nature which grows both gardens, no matter how different the skill of the gardeners.  So how does the garden grow?  Well… naturally, of course.  But for nature to produce Pentacles takes a certain amount of wisdom as well.