You are here: Home1 / Tarot Card Eights: Melodrama and Movement 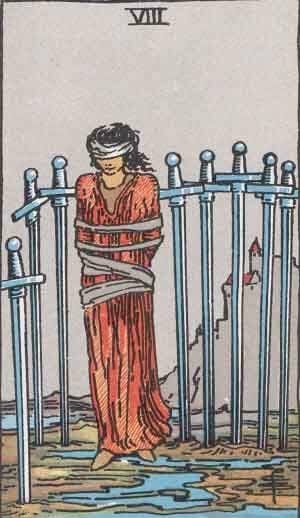 The Eight of Swords has got to be my favorite card in the Tarot if for no other reason than the sheer melodrama of it.  Nell isn’t quite tied to the railroad tracks, but near enough.  She has escaped from the tower bound from top to bottom, her eyes blindfolded, only able to feel her way along her life path of water with her toes.  By some miracle, she is about to escape through the one small opening in the wall of shining sharp Swords.  What danger if her foot should slip?! 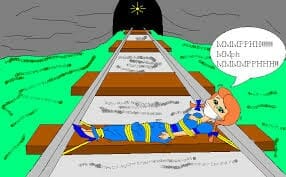 We have to ask ourselves how she got here and where she is going, and to do this I line up all of the eight-cards.  I always order the cards from the mundane to the sublime, Earth-Water-Air-Fire, Pentacles-Cups-Swords-Wands, physical-emotional-intellectual-spiritual.  This progression is a learning path of the soul, the path of the Fool which echoes throughout the Major and Minor Arcana.  The earth eight card has no water path, but once the water bursts free in the Cups card it connects beautifully from card to card leading us gently onward.

Poor dessicated Pentacle man, work work work until he finally takes off in Cups late at night, Wand in hand, setting his life and emotions in order behind him and heading into the rocky

mountainous unknown.  And where in Swords is she disgorged?  A desert plain, oppressively gray, sterile, bound hand and foot and fraught with danger.

Never fear, the Fool is here ready to step into that unknown.  And we know the Fool never really falls off his cliff, somehow he learns his lessons and achieves his ends.  In this case, the end in Wands is not tumbling water in the Cups gorge, not trickling water in the Swords desert, but a clear stream in a pastoral countryside with the spiritual Wands flying full speed through the sunshine free of all things temporal.  What more could you ask?

But then we all know Nell never gets hit by the train, she is always rescued.  In the Tarot, however, we rescue ourselves by going on our journeys big and small, and in the Eight of Swords I have never known her to miss the gap.  It’s always blackest before the dawn!  Now this is melodrama.