Tarot Card #10 Wheel of Fortune: What Goes Up, Must Come Down

You are here: Home1 / Tarot Card #10 Wheel of Fortune: What Goes Up, Must Come Down 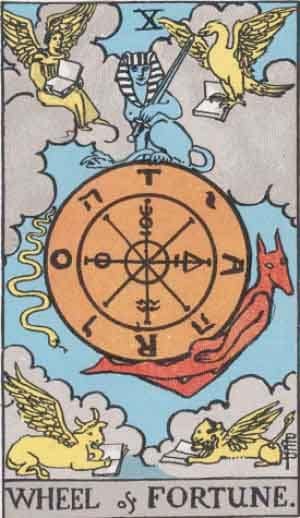 “Spinnin’ wheel,” says Blood Sweat and Tears, “got to go ’round.”  This is a simple card, right?  We’re at the mercy of the vagaries of the universe.  Easy.  So what else is there to say?

For one thing, we might ask who are these strange creatures strapped to the wheel, and what arcane symbology populates the firmament through which they spin?  This card is filled with icons, and I have to admit through all the years I have been reading I remained remarkably ignorant of their meaning.  So I sent myself on a little journey of discovery.*   Now bear with me for a moment.

We can see the letters T-A-R-O in a circle, which spells out tarot, but also spells out Rota, Latin for wheel.  Being modeled after the wheel of the goddess Fortuna, this card follows the medieval concept of Rota Fortunae.  Alternating with the letters T-A-R-O are the Hebrew letters י-ה-ו-ה, usually transliterated as YHWH (Yahweh), the name of the god of Israel. 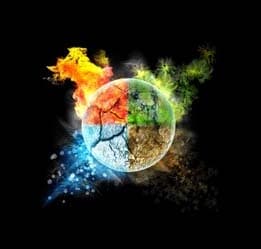 At the center, interspersed with the spokes of the wheel, we find alchemical symbols representing the four elements of Earth, Water, Air, and Fire, which are also said to be represented throughout the Tarot by the four suits of Pentacles, Cups, Swords, and Wands respectively.  I would be curious to hear if they correlate in any way with the four Directions, though I wouldn’t know which is which.  I might save that rabbit hole for later. 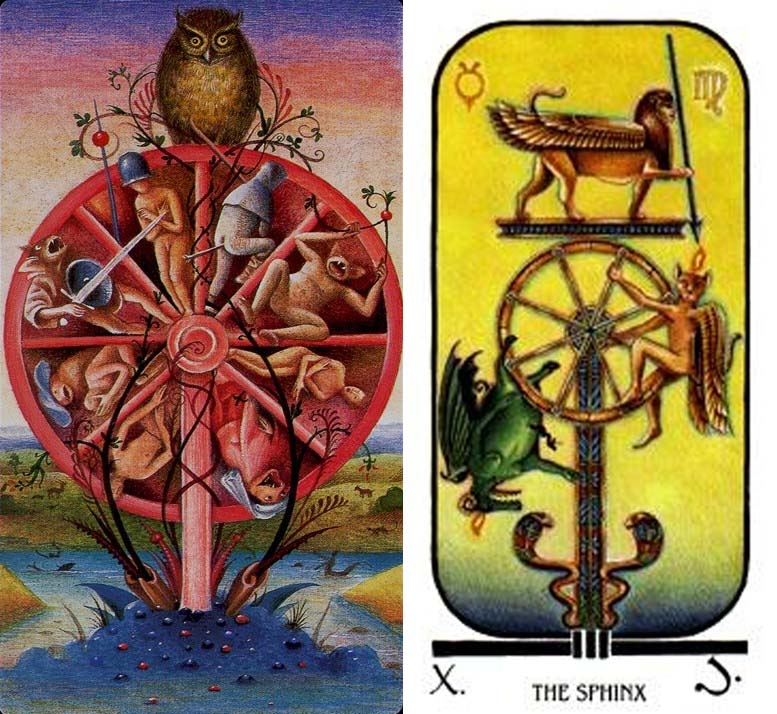 The wheel is perhaps presided over by a personified Fortuna, in the shape of a Sphinx-like half-human in an Egyptian headdress.  There are also two other figures rising and falling, though there are three or more in other decks.  Here we see a falling snake, such as the one that tempted Adam in the Garden of Eden, and rising the Egyptian God Anubis, who is associated with the afterlife.

Finally on our Waite Smith card we look at the four corners, where we find four winged creatures representing the four fixed astrological signs of Leo, Taurus, Aquarius and Scorpio.  These are alternatively represented as the symbols of the four Christian Evangelists (Matthew, Mark, Luke and John) traditionally symbolized respectively by the Ox, the Man the Lion and the Eagle, each with wings.

y, now we’ve been told something about each of the symbols.  But what does all this mean?

We certainly have a weaving of many traditions, the Egyptian, Hebrew, alchemical, Christian, astrological, Latin, each overlapping the other.  Certainly in the spinning universe all of our traditions and beliefs can be seen to mix together and while different they are really the same, all weaving a thread to help us tie together our crazy world, especially the invisible bits.

Perhaps at different turns of the wheel we personify different characters we see attached: sometimes at the top of the world we are in balance having achieved some wisdom, sometimes we are falling into temptation, sometimes we are rising again in the afterlife because the wheel demands that nothing ends not even with death.

Tarot Card Meanings: Wheel Around And Around

In any event the written word tells us that the Tarot is the Rota, the Wheel of Fortuna, spinning in endless cycles.  What goes up must go down, because the spinnin’ wheel goes ’round and ’round.  We are at its mercy, no doubt.  So complicated it’s actually simple.

* Thank you Wikipedia, among others including actual books (we remember those.)
The print is of the Roman goddess Fortuna by Hans Sebald Beham, 1541.
Unfortunately, I could find no attribution for e four elements wallpaper.
The pair of Wheel cards are from the Bosch and Ibis decks.
The ivory carving of the four evangelists is Italian or German from 1000-1050.
The picture is an Irish spinning wheel, around 1900,  from the Library of Congress
The last Wheel card is from the New Moon deck.